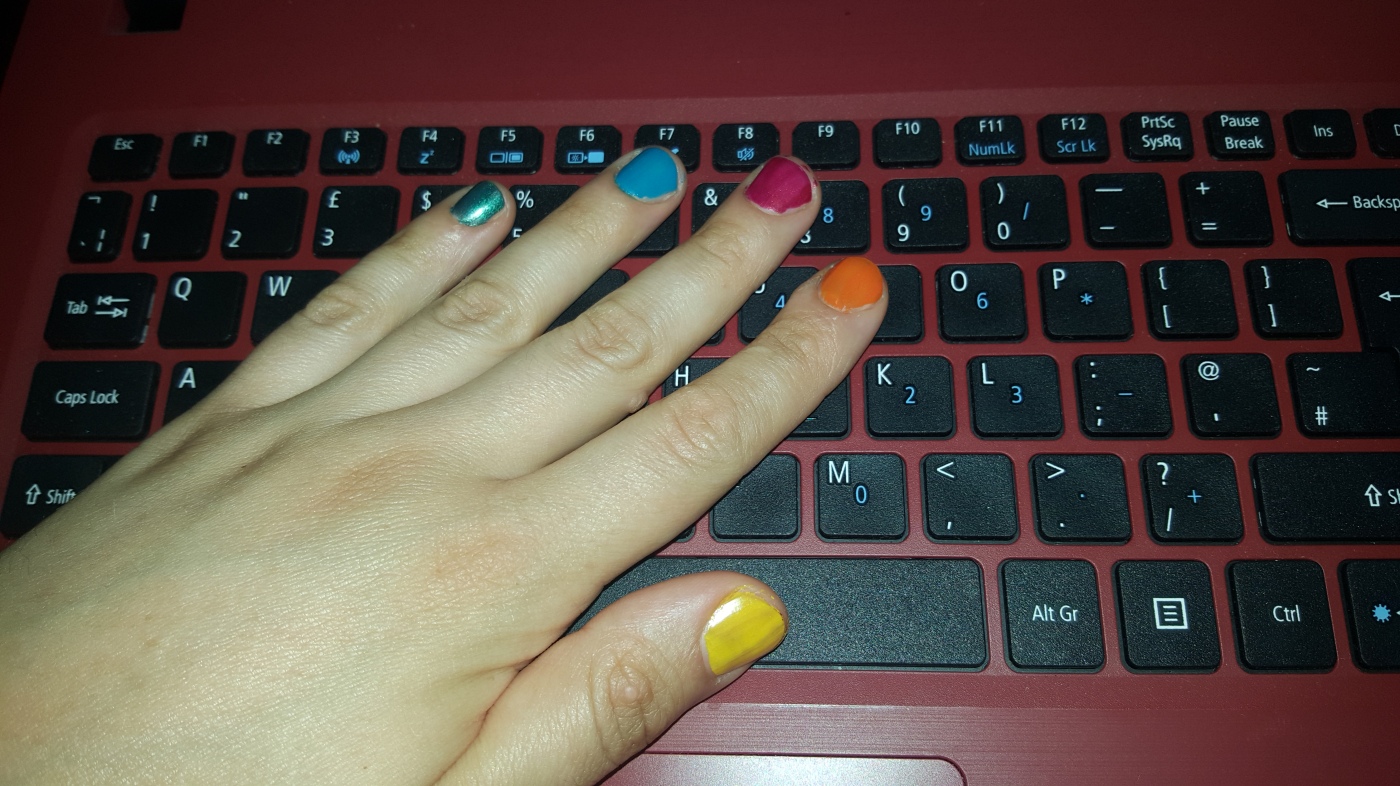 It is Pride Weekend. My Facebook is full of glitter and my nails are rainbow. But my mind strays from more straightforward (hah) celebrations to a road less travelled. Here is my quiet love story with fanfiction, which I started reading around age sixteen, became obsessed with at nineteen, to the point of writing my Master’s thesis on it back in 2011.

As a kid I read Everything (and some of it twice). I was pretty obsessed with novels (hello, Three Musketeers and everything Dumas ever wrote!) and about age thirteen I stumbled into the world of Harry Potter. Thirteen is, of course, the age that the Polish translation came out and was heavily promoted. I got myself a free copy of the book and from then onwards, I was lost. Around book four, I gave up on waiting for the translation to happen and got my greedy little hands on the English-language Harry Potter and the Goblet of Fire. At the launch of book seven I was actually in the US, queuing up at Borders around midnight; I remember getting up at 7 am next day and being done with the book around 2 pm. I devoured Harry Potter and at a certain time, I ran out of it.

Enter fanfiction. In fact, history repeated: I found a Polish language fanfic forum, read most of it, found an ongoing translation of a fic I Really Liked (which I can’t link to, as the author has long gone to the published side of the Force….!) and clicked through to the English version. My story of fanfiction is, in many ways the story of me mastering the English language. I have done it mostly through reading romances about wizards. You’re welcome.

Technically, it’s any fictional writing that is viewed in the context of an “original” or “canon”. In this sense, POV books such as The Penelopiad by Margaret Atwood, could be regarded as such. To many people, fanfiction means lack of quality and literary merit: those people don’t know where to look for good fanfiction. Oh, for sure, bad fics exist; but like any literary society, fanfiction has developed recommendation systems (recs), that help you locate where the good stuff lives. Final definition could be that fanfic lives on the internet, for free, whereas Real Literature you get paid for. Aside from a furious mime pointing towards the Fifty Shades of Grey books (their literary merit is a separate discussion), that definition mostly covers it.

To be honest, my first reason to read fanfic was to get Moar Harry Potter Content. The proliferations of a Canon are infinite – what if we genderswap everyone? What if we put these characters in a rock band and have them tour the world? Some of the variations are almost scientific: take character A, character B, a dash of universe U and… wait for an explosion. In fact, many writers cut their teeth on fanfiction and it’s easy to see why: you get to practice controlling the plot when the characters are already created; you get to play in somebody else’s sandbox, decorating a pre-existing sandcastle. You get to, interestingly, find the holes of the original – to go back to the Harry Potter example, its mythical quality (some houses are Inherently Bad, etc.) lends itself very well to a meditation on the nature of prejudice. I have read many a fic in which the Slytherin perspective has been told, in which the original rejection of Draco Malfoy by Harry Potter never happens, changing the course of war and history for the better. The very nature of fanfiction is looking for a different narrative, much like jazz music meanders around a melody that’s being improvised on. So you’ll find alternative universes where being gay and trans is so normal nobody remarks on it, the authors trying to figure out those perfect societies; conversely you will find “Man in High Castle” meditations on the nature of authoritarianism as well.

What draws me to fanfic?

To this day, I read fanfic, although it is rarely Harry Potter. I made several lateral moves over the years, reading all and any fandoms regardless of knowing the original texts. I’ve been mostly guided by good authors: people who write amazing Harry Potter fic have written great Stargate Atantis, Due South or Avengers fic and therefore introduced me to those fandoms. The combination of non-male-gaze perspective, the structural lens with which the authors tend to view society and a good sex scene here and there is pretty irresistible! I have also followed the published authors who had to delete their fics once they got published – because I knew their writing to be good back when nobody was paying. I love fanfiction, because it’s a supportive community; because it offers a new writer some training wheels with which they can learn to ride through the peaks and valleys of plot; because it’s a place to meditate on favourite characters, their backstories and motivation. And finally, because at its best, fanfic is a way to change the world – one Harry-Potter-is-gay-and-proud story at a time. And don’t get me started on Captain America….!

One thought on “Happy Pride: A Love Letter To Fanfiction”

Talk To Me! Cancel reply