Today I say down to remote writing brunch with Rhymes with Orange collective. My prompt was a sequinned jacket.

Do you remember that magical night?

Light in my face and you in my arms

Your wit had sparked as you held the mic

But on your torso the sparkle was mine

Do you remember that magical night?

Since then I’ve wept tears dusty and dry

Have you forgotten how I made you shine?

Together we were thoroughly divine!

Come on, comedian, don’t you break my heart

Give your sequinned jacket a deserved new start!

if you are anxious before family meetings
and interacting carefully, like strangers
is your best-case scenario

if you can’t trust your people
to remember things as you remember
if things are never light, only gaslight
never relaxed, only tear-bright

this poem is for you

if you’re no son, daughter or sweet child of mine
if you learnt to set boundaries by being so far
that you want the distance to make it hurt less
that you hope you can cope and say yes, you’re fine

this poem is for you.

if estranged is best, if family crest
says never return, if burning those bridges
was the one road to safety and to your own nest

if holidays are harder, if you never started
to heal and your parent died, if it’s too real
this time of year, talking of rebirth
when your heart is ashes where family should be

this poem is a hug. this poem would like
to be the mum and dad you never had
this poem reminds you gently,
when it’s said and done

you’re not the only one.

it scared the water. down to blood

the trees are trembling in the wind.

it hurt the water. silver fish

that glide soundlessly just beneath

they kept on moving, racing through

and all above was frozen still

and frantic movement down below

survival hinges on the warmth

it froze the water down to blood

can’t stop until the thaw. 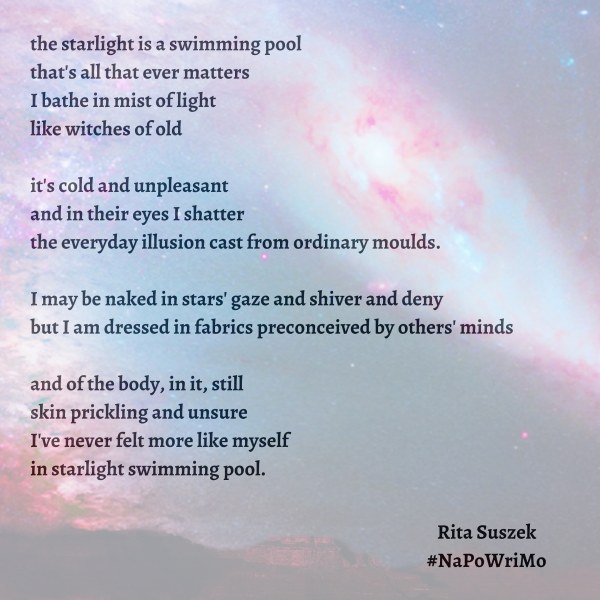 Today the prompt from @GardensBritish on Twitter made me remember Emily of New Moon, from Lucy Maud Montgomery’s books. And so, the poem:

it’s cold and unpleasant
and in their eyes I shatter
the everyday illusion cast from ordinary moulds.

and of the body, in it, still
skin prickling and unsure
I’ve never felt more like myself
in starlight swimming pool. 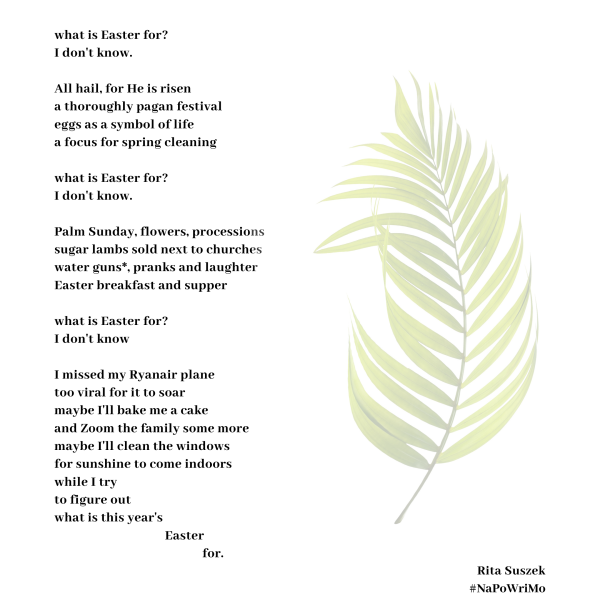 All hail, for He is risen

eggs as a symbol of life

a focus for spring cleaning

sugar lambs sold next to churches

I missed my Ryanair plane

too viral for it to soar

Maybe I’ll bake me a cake

and Zoom the family some more

for sunshine to come indoors

what is this year’s

*in Poland, Easter Monday has a tradition of pouring water on other people. While it started as a village courting habit, if you *have* to leave the house on Easter Monday, I’d advise a water gun – it’s you against the world!

I think I may be enormous,
I am so stupidly happy,
and this day, this now, this time
I write down with shaking hands.

Back to NaPoWriMo.Net prompts – today they were newspaper articles. I took a shine to this piece by the New Scientist about Earth having found a small, temporary extra moon:

Earth has a brand new moon

maybe the size of a car

blasting out tunes in the dusk)

parked itself inside Earth’s orbit

and without being too morbid

it will last till it doesn’t

they’ll moon until love runs out

Earth has a brand new moon

about the size of a car 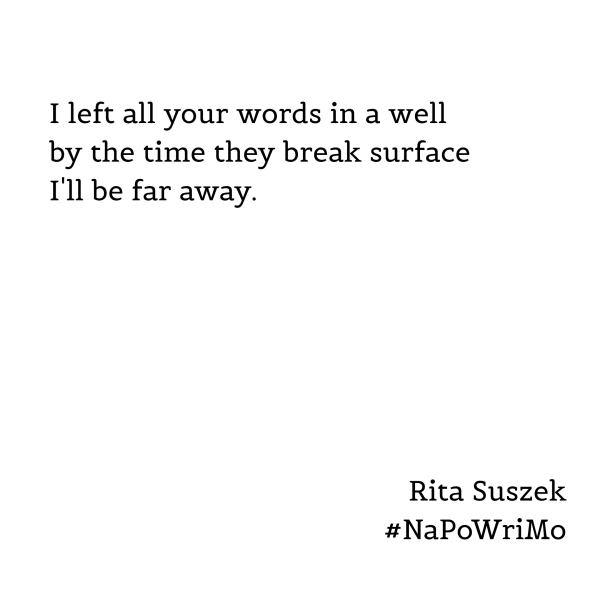 I forgot to post to the blog, so now catching up. Between writing the poem, posting it to Twitter, Instagram, Facebook AND my writing group WhatsApp, it slipped my mind. But here it is – the most popular of the poems so far. Also the shortest.

I left all your words in a well

by the time they break surface

I’ll be far away.

This poem was written in the format of Golden Shovel, which means that you take a quote and put each word of it as the last line of the poem. I used “Nothing Can Ever Happen Twice” by Wislawa Szymborska, which you can read here:

when you arrive, you say nothing

you’re barely there, will leave when you can

I don’t know how to hold you, if ever

I got a chance for that to happen The NaPoWriMo.net prompt had us look at Twitter bots and one of the was about British gardens! Plus an ironic conversation on the topic and here it is…:

You are in a British garden. Your

elbows are tidy. Tucked away neatly against

on a leash. Won’t even sniff

at magnolias. You are in a British

garden. Everything here is British.

as it was foretold. Cherry petals

fall. You are the dirt.

negligible, necessary. You are in

a British garden. Isn’t she

lovely. Which Beatles song are you?

you, me, really. Mosquitoes buzz.

Focus on that. Roses, posies.

Poppies. Haze. Who was I again?